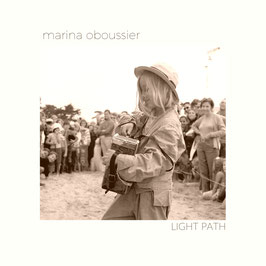 The journey begins by a few notes delicately picked out by Marina on an acoustic guitar, overridden by a sound which seems to come from another world: BJ Cole’s inimitable pedal steel guitar. This is not just any old Tom, Dick or Harry: Cole, an English musical giant of the instrument, has played with anyone who’s anyone, Elton John, David Gilmour, Michel Polnareff (the divine illuminations on “Holidays” are his creation). The album carries his trademark ethereal, dreamy, incomparable stamp.

And the dreamlike journey continues by “I Lie Awake” with the intro by Marina alone on her guitar – Marina has written all the songs on the album. Every now and again, her voice hits a syllable and soars upwards into the high notes, with the amazing natural agility which so few singers truly master – recalling the great Sinead O’Connor. In come the drums, double bass and a gentle rhythmic piano, creating an intimate atmosphere, a sort of flash back to Nick Drake’s seventies productions…

The Anglo-Saxon connection is natural and obvious; the album has been produced by Neil Conti, former drummer with Prefab Sprout, now living in France. Neil too has played with some of the biggest names in modern music (David Bowie, Mick Jagger, Annie Lennox, and so on…).  Neil was seduced by Marina’s guitar-vocals demos and encouraged her to record her album in this sober, acoustic vein. Neil invested heavily in the project, letting Marina use his studio, Minimoon, and working with her on the musical structure, writing the string arrangements and playing not only drums, but also piano and some discreet electric guitar… He then mixed the album with his faithful associate and sound engineer, Jeff Fernandez, who is to thank for the subtle, warm tones which infuse the sound recording.

Although eight songs out of ten are sung in English, there is no
posture or caprice here. Marina Oboussier, of Swiss-German

origin, is an artist without borders. She has an English father and French mother, and lives in the South of France…so, there is nothing surprising to see her performing in the language of Shakespeare…but with the meaningful lyrics which are so rare in this neck of the woods. Her father introduced her to some of the greatest musicians, who still influence her today: Crosby, Stills, Nash & Young, the Beatles, Simon & Garfunkel, Joan Baez…only the very best!

Marina’s musical culture, though, goes well beyond these classic timeless influences, since she started out as an… accordionist! A talent she long used to serve Irish music, performing with group Foggy & Co and today with Yörük, a female trio performing the songs and music of the Mediterranean and the Balkans.

She plays her accordion on several songs, particularly “La Valse à trois temps”, sung in French, and a kind of magic bridge between country, folk and musette, or, if you prefer, between Emmylou Harris and Edith Piaf… Another song in French, the intoxicating “Tattoo”, uses a festive tone to handle the sensitive subject of the frailty of all things. Finally, in “Stars Above”, her accordina blends delicately with the sound of strings, bringing renewed colour to the album’s rich acoustics.

Both varied and coherent, Light Path is an album infused with a gentle, romantic tone, born of a state of emergency: the aftermath of a difficult separation. Rocked by the event, Marina picked up her guitar and the songs just flowed forth. The dreamlike, nostalgic atmosphere allows for some vibrant flights of fancy, as in “All Life Long”, a catchy tune with gypsy-jazz flavour performed by great specialist of the genre, guitar virtuoso Drom Blanchard.

Light Path is a journey of intense and inspired breath-taking beauty, carried by touching, sensitive vocals with superbly-honed production. A rare and precious jewel: both classic and innovative, unformatted, unclassifiable and with universal appeal.